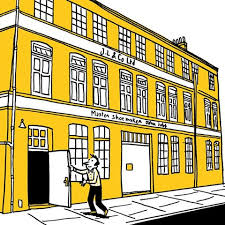 John Lobb is an example of a successful footwear manufacturer that, with its ready-to-wear collection, has bought into and adopted Northamptonshire’s reputation for quality craftsmanship and shoe-making heritage.

John Lobb was born in Cornwall in 1829, but made his way to London as a young man as an apprentice boot maker. He established the original John Lobb in 1849 and following a successful period in Australia making boots for the miners of the gold rush, he returned to London to set up his first shop on Regent Street in 1866.  This business continues making bespoke handmade-to-measure shoes and boots to this day and is currently run from its St James Street premises in the West End of London by the fifth generation of the Lobb family.

John Lobb rapidly established itself as the premier boot and shoemaker of the day, providing a bespoke service to the aristocracy, as well as the political and business elite.

Recognising the demand for ready-to-wear shoes, in 1976 the Lobb family sold part of its business in Paris to the Hermès Group and enabled them to develop the John Lobb ready-to-wear collection of men’s shoes, as Lobbs were then only available to bespoke customers, limiting access to a privileged few.

A London ready-to-wear boutique in Jermyn Street followed shortly after the opening of the Northampton workshop and John Lobb ready-to-wear has since expanded its retail presence across the globe with ready-to-wear stores in major cities in the US, Europe, the Middle East and Asia.