In the Middle Ages Northampton was a busy market town. It had a street of cordwainers (shoemakers) making footwear for the locals as other towns, but it had the advantage of being a stopping place on the road to London, and many people, including the King stayed in the town. In 1213 King John purchased a pair of boots in the town for 9d (4p). His son Henry III ordered one hundred and fifty pairs of shoes for distribution among the poor while he visited the town. In 1401 The Shoemakers Guild was set up which laid down rules for shoemakers and had the powers to punish those, whose work was unsatisfactory. Northampton was slowly becoming a town where shoes were made and sent for sale in other places.

Well the town had the advantage of possessing three raw materials. Cattle for the leather and oak bark and water to use in the tanning process. Northampton was also within easy reach of London and other large towns where many people needed shoes.

The army marches on its shoes

What sealed Northampton’s fate as a shoe town was that in 1642 thirteen shoemakers led by Thomas Pendleton, gained a contract to produce six hundred pairs of boots and four thousand pairs of shoes for the army going to Ireland. They fulfilled the order on time and to the standard required and so Northampton became known as a town capable of supplying footwear on a large scale. By the 1650s the shoemaking industry was well established in Northampton by 1650.

In 1660 Thomas Fuller wrote that “the town of Northampton may be said to stand chiefly on other men’s legs…the most cheapest, if not the best, boots…in England are to be bought in Northampton.”

Shoemaking was carried out in workshops at home and due to the different skills required for women’s shoes; the town specialised in men’s footwear 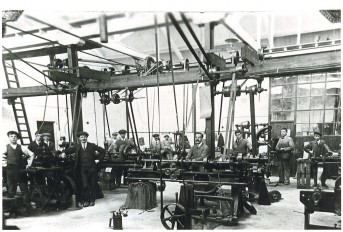 The coming of machinery

The turning point for the industry was the introduction of machinery. The Singer sewing machine had been introduced from America, modified to stitch leather rather than cloth. It was used to close uppers. The American Lyman Blake perfected his machine the Blake Sewer for stitching on soles in 1864. This machine was too large, heavy and expensive to have at home and needed power to drive it. It drove the shoemakers into factories over the next thirty years.

Northampton in the 19th century boomed, with the boot and shoe industry dominating the town and county. In 1836, one manufacturer, William Parker, made 80,000 pairs a year. In 1841 there were 1,821 shoemakers in Northampton. Many of the town’s most famous factories were established at this time, including Manfield, G.T Hawkins and Padmore & Barnes. 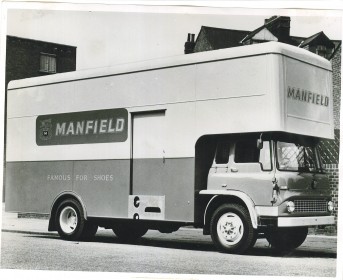 Challenges to the traditional industry

Northampton continued to prosper particularly during World War One producing millions of boots for the Forces of Britain and its allies. From the 1940s cheaper synthetic materials and quicker manufacturing processes became available and the traditional industry, based on high quality leather footwear found it hard to adapt to the new market. From the 1950s and into the 1970s Charles Clore, who set up the British Shoe Corporation in Leicester bought out many of the well-known footwear manufacturers. He kept their high street shops, but gradually closed their factories, buying cheaper supplies from developing countries.

All these changes led the industry to shrink to a fraction of its former size. However there are still a number of incredibly successful shoe manufacturers in the town and county who still produce high quality classic men’s footwear that is renowned across the world.