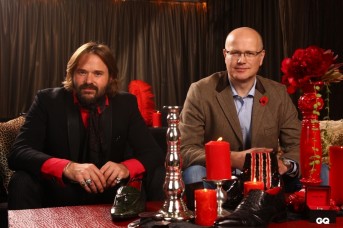 Childhood friends Mark Jeffery and Guy West were born and bred in Northampton and grew up surrounded by a rich shoe-making tradition and history. Jeffery’s father ran the family owned shoe factory in the town, and at just 16 years old, Mark and Guy were designing and selling their own shoes at markets in Northamptonshire and also at Kensington Market in London.

Mark and Guy were soon sourcing their own leather supplier, clicker and closing room in order to have their own designs produced, and in their early twenties founded the fledgling Jeffery~West in 1987 and their designs became renowned for their overt elegance and fulsome flamboyance. Mark and Guy continued to innovative using new lasts and an array of leathers and colours all too often lacking in men’s shoes, in Guy’s own words “you’re buying that manufacturing history but it’s with our handwriting, our twist, our slant on it.”

Regency dandies, fin de siecle decadence, twentieth century subculture and pop culture, literary and filmic references and a whole swath of swashbucklers, wits, and hell raisers both influence and inspire the Jeffery~West designs which extends to the smallest detail; for example the punching is always diamond shaped, inspired both by Gothic and Victorian Gothic Revival architecture, which also directly informs the arrowhead wingtips. 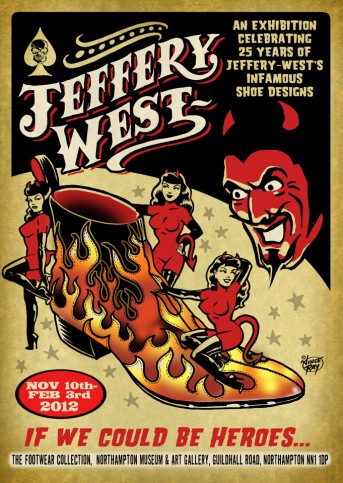 The rich, dark, and dramatic colours of Gothic Revival interiors, purple, black, gold, green are not only played out in the Jeffery~West shoes but also in their shop interiors, all of which offer a heightened mix of gentlemen’s club, bordello, and oubliette.  Just like their re-workings of traditional footwear styles, Jeffery~West also offer a range of traditional gentlemen’s accessories, all handmade in England, but equally all re-imagined to compliment the themes and styles of the footwear.

2012 saw the 25th anniversary of the business which was celebrated through a major retrospective exhibition about the infamous brand at the Northampton Museum and Art Gallery entitled ‘If We Could Be Heroes’.