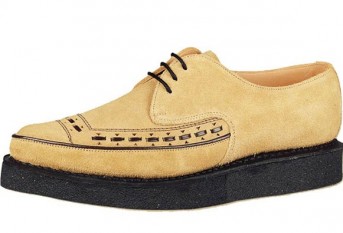 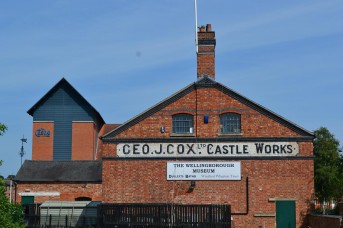 George James Cox, a brewer in Wellingborough, established a shoe company in 1906.  With business thriving, he converted Dulley’s Baths, the swimming pool formerly belonging to the brewery, into a shoe factory after the First World War.

George Cox & Co. has always combined the quality which makes Northampton famous with a flair for original design with perennial appeal.  The company pioneered its signature product, the “brothel creeper”, in 1949, a style for which it is famous throughout the world.  Teddy boys, mods and then punks, which included the Sex Pistols, all made this rockabilly shoe their own.

Still based in Wellingborough (but not in the old Dulley’s baths works, that’s now the local museum), the company still produce the creeper style and collaborate with international designers and fashion houses to constantly reinvent the classic.