SATRA’s Head of Research Tom Bayes talking about the boot 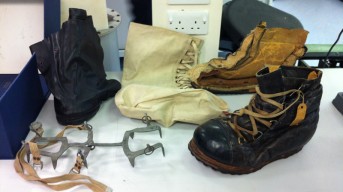 In 1953, a ninth British expedition, led by John Hunt, aimed to reach the summit, but it was a New Zealander Edmund Hillary and Tenzing Norgay, a Nepali sherpa climber from Darjeeling, India who reached the summit at 11:30 am local time on 29 May 1953 via the South Col Route.

News of the expedition’s success reached London on the morning of Queen Elizabeth II’s coronation, 2 June.  Returning to Kathmandu a few days later, Hillary discovered that he had been promptly knighted in the Order of the British Empire, a KBE, for the ascent. Tenzing, a Nepali sherpa who was a citizen of India, was granted the George Medal by the UK.

SATRA of Kettering was approached by the expedition a year before it took place and asked to design a warm, light, weather-proof, crampon-compatible boot for use high on the mountain. The result was a 1900g boot which was considerably lighter than the alternatives, but it was also seriously innovative in design and manufacture.

SATRA was formed in 1919 and is the world’s leading research and technology centre of its kind helping to improve the performance, quality and safety of a wide range of products and materials the world over.