It was Thomas Gotch the son of a farmer who established the earliest formal shoe business in Kettering in 1777, in partnership with James Cobb, a local ironmonger. In 1793 the firm took the significant step of moving into a new factory attached to Gotch’s home in Lower Street. Here they began to produce footwear on a scale that allowed the firm to compete successfully with the Northampton based wholesale shoe makers for the valuable Army and Navy contracts.

The manufacture of boots and shoes was once the most important industry in the area. With the collapse of the weaving and silk industries, the demand for military boots and the arrival of Kettering railway the boot and shoe industry flourished.

The business was organised so that the manufacturing process was divided between the factory and ‘outworkers’ who were often skilled ex-weavers working from home. The system in Kettering was known as basket-working due to the baskets that the workers used to collect and return their work to and from the factory. 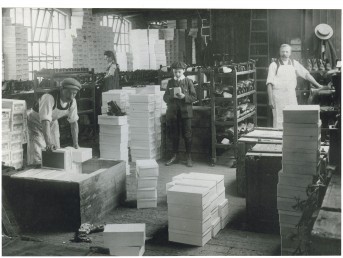 Packing shoes in Kettering for export

Many of the county’s big boot and shoe names such as Dolcis, Freeman, Hardy and Willis and Timpsons originated from Kettering. Kettering was also the home of many shoe machinery manufacurers as the scale of industry grew. Local manufacturers such as Charles East and Owen Robinson produced sewing machines for closing shoe uppers. During the 1860s and 70s a whole new range of machinery was invented and made in Kettering, such as sole cutters and presses, combination machines, heel attachers and blocking machines. To house the new machines, bigger factories were built which had a huge impact on the growth of industry in Kettering.

Homes for the workers

As the boot and shoe industry grew, so did housing for shoemakers. Many large homes were built in areas such as the Headlands and Rockingham Road for factory owners, and terraced streets provided accommodation for the workers.

Kettering, like many other towns in Northamptonshire, has undergone radical changes in the last century. The boot and shoe trade, the mainstay of its wealth for over a century, has mostly moved away, with the town gradually evolving a new identity. High quality makers such as Loake’s still produce footwear locally for a worldwide market to continue this rich heritage.

The Manor House Museum holds boot and shoe machinery that once was familiar to thousands of the town’s inhabitants.