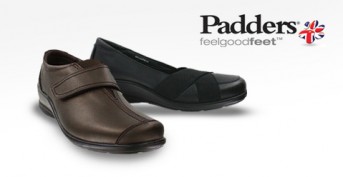 Padders was founded in Rothwell at the start of the First World War by the present grandfather Thomas Groocock, making traditional welted shoes.

During the inter-war years the company continued to thrive and like many of Northamptonshire’s footwear manufacturers turned its hand to making army boots and ‘utility’ men’s shoes during World War II.

By the late 1950s, the company was working with Densons to produce the famous beetle-crushers and winkle-pickers, and was manufacturing 3,000 pairs of shoes a day.

In 1982 the Padders brand was launched and was such a phenomenal success story that by 1987 there were four factory plants in action, producing well over one million pairs per annum.

In 2004 Padders left their Rothwell roots and moved just down the road to neighbouring Kettering and into a brand new 42,000 square feet factory, with state-of-the-art manufacturing processes, distribution facility and retail factory outlet.

Today c. 50 people are employed at the factory, including core management teams in sales, production and planning, and its wide range of men’s and ladies comfort footwear are now sold to over 1000 independent retailers nationwide.