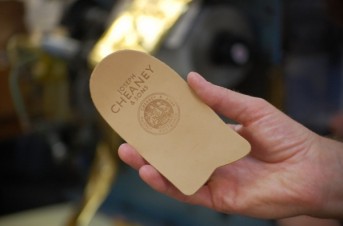 Joseph Cheaney had been the factory manager of B. Riley, but in 1886 established J. Cheaney, Boot & Shoemakers in a small premises in Station Road, Desborough.

Joseph Cheaney was a prominent local character, being a local councillor and also had involvement in the Church. He was interested in the welfare of local children, and it appears that he used to keep them supplied with oranges.

In 1896, the business moved to the site it still occupies today – a purpose built factory to house all aspects of shoemaking, from the cutting out of the leather (clicking) to the final polishing. Although some manufacturers now outsource the initial production of the uppers to the Far East, Cheaney shoes are still cut out and ‘closed’ in Desborough, Northamptonshire as they have been since 1886.

The factory was kept very busy in the First World War, producing about 2500 pairs per week of stitched and screwed boots and shoes. Building on this success, the company continued to flourish, even through the lean post-war years and the global depression of the 1930s. Production was modernised, whilst retaining the same handcrafting methods and the distribution base was broadened to include the major conurbations of the United Kingdom.

In the post war years up to the early part of the 1960s, the company did not produce under its own brand but made shoes for major retail groups in the USA and the UK that were then sold under their names. 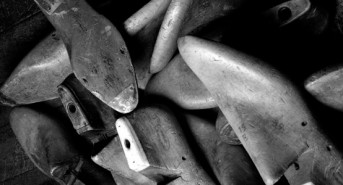 Overseas sales continued to grow until the adverse effect of the inflationary pressures of the 1970s, which affected Cheaney along with many other British exporters, and by the 1980s, many of Northamptonshire’s shoe companies had ceased trading.  Even in this very challenging environment, Cheaney continued to prosper at home, assisted by the introduction of an instock system of branded footwear.

By the mid-1980s, Cheaney’s export business had recovered well and, by the approach of the new millennium, had a very healthy order book in terms of both its own branded product and also the footwear made for other retailers. 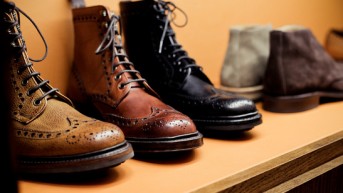 In August, 2009, cousins Jonathan and William Church conducted a management buy-out of Cheaney from Church & Co (by then a wholly owned subsidiary of Prada). Church & Co now own and operate the company and are committed to continuing the production of high quality shoes entirely made in Northamptonshire, from the cutting out of the leather to the final polishing, just as it was in 1886.