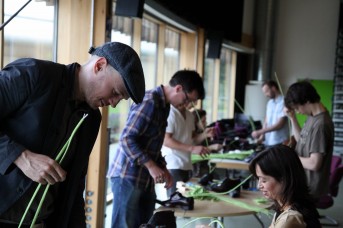 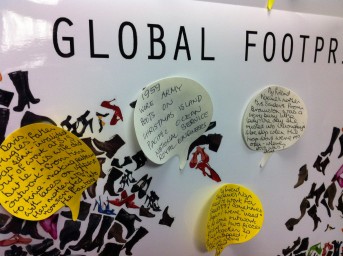 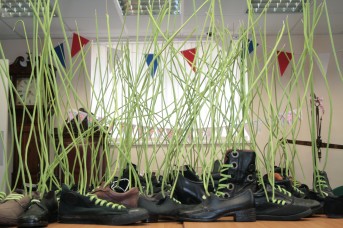 Our involvement in the Global Footprint really kicked off when artist Dominic Wilcox brought his Field of shoes to Daventry in August 2012.

We gathered a crew of keen volunteers and met up at the iCON to meet Dominic, Sally-Ann and Graham to find out how to construct the artwork which we were going to use to start conversations at the Museum the next day.

Four huge bags of donated shoes were tipped up on the floor and shiny brass wire with wooden blocks appeared. Dominic demonstrated how to create each shoe with its snaking green laces reaching upwards. He also explained his ideas behind the artwork; how he was interested in giving the impression of new growth from something that was worn out. Certainly when several finished shoes were put together they did start to resemble green shoots growing from an earthy brown field. Some of them smelled a bit earthy too!

Field at the Museum

The next day was a Saturday and we had publicised an event at the Museum where the public could bring in their shoes and add to this artwork as well as share their stories. Jim and Alex brought all their filming equipment and set up in the store upstairs to interview people about their shoe making connections and memories. The very first person to be interviewed was our very own Gwen who grew up next door to Stead and Simpsons!

The Daventry Express came and BBC radio did an interview on site. We turned the council table into a space to create more Field shoes. People came in throughout the day to have a go and soon we had shoes with their green laces all down the side of the gallery.

When everyone had had a chance to see the shoes at the Museum they were taken down to the iCON and Sally laid them out in the atrium. They looked fantastic and for the next two weeks stopped people in their tracks!