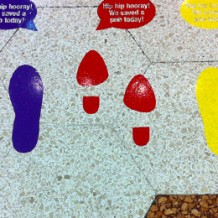 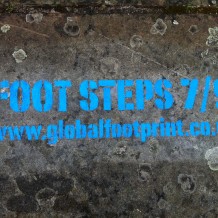 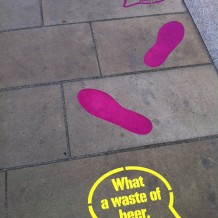 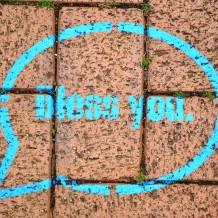 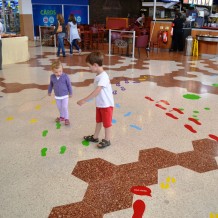 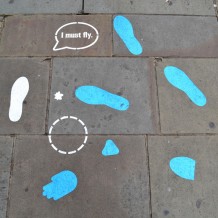 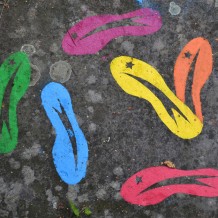 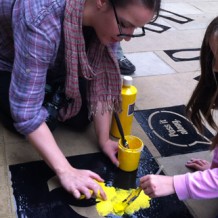 Colourful footsteps across Wellingborough town centre encouraged participants to discover the hidden stories of the streets with this interactive work from award-winning Birmingham based theatre company, Stans Cafe.

Emanating from the town centre, FOOT STEPS depicts stories of both historical events and characters in the town, including an April Fools Day prank in 1959 which involved someone painting white footsteps through the town centre.

‘Pavement surfaces a major variable and radically effect the quality of finish.  Working outdoors we are vulnerable to rain, failing daylight and locals either being very friendly – and therefore distracting – of quite unfriendly and therefore distracting.  The general verdict on the installation process of FOOT STEPS: “we got away with it”.  Encouragingly the feedback from passers by during installation – beyond the man who threatened us with the police – was that the piece was great and livened up their streets.’

FOOT STEPS is the fifteenth edition of Stans Cafe’s Steps Series, which began in 2008 and was inspired by ‘teach yourself to dance’ floor mats, using footprints, handprints, text bubbles and other graphics to create instructions for ‘do it yourself’ performances for the public to puzzle out and participate in. Each new edition of the series tells a new story responding to its new location.

James Yarker, Artistic Director for Stan’s Cafe said: “It is exciting to translate elements of the town’s colourful history into an engaging street art installation.  We hope it will prove popular and that people of all ages will have fun exploring it and playing with it.”

FOOT STEPS was installed in seven locations around the town and attempts to render these moments of local historical significance in re-enactable form.