The Company was founded by William Botterill in 1895 to manufacture Boots and Shoes as a Cottage Industry (Pictorial History of Bozeat, 1992).  In about 1903 William moved from Wollaston to a house towards the top of London Road and a factory grew round the house to include the Bozeat Boot Company, until the site was full in 1974.  Originally there were two ‘clickers’ and two women ‘closers’, the work being mostly sent out to home workshops.  Gradually machinery was introduced and army boots were made during the Great War. 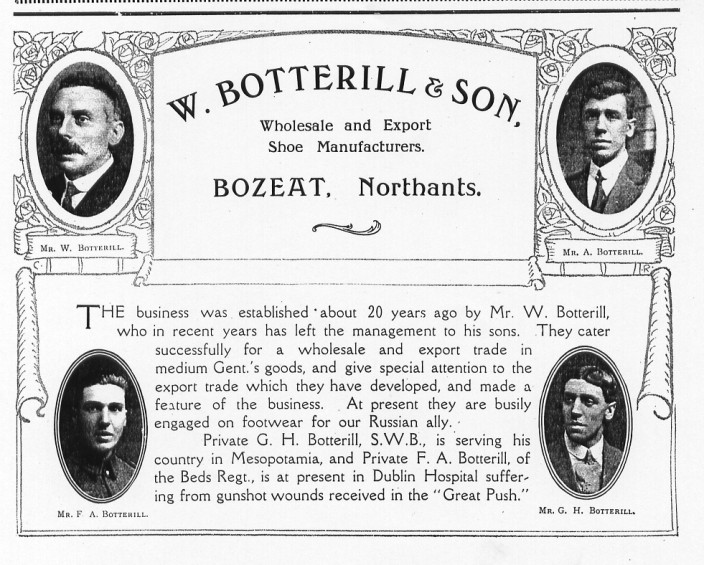 During the First World War boot making continued, including boots for British and Empire soldiers and probably for the Russian army.  After the war William was joined by his sons Alfred and George who took over the management and expanded the company to make all types of boots and shoes and football and rugby boots.

As the years passed the business grew.  Extensions were made to the factory, an engine was installed to drive the machines by a maze of pulleys, shafts and belts and a generator produced DC current to provide lighting.  As production became more mechanised, workers moved into the factory and home working stopped.

During the mid 1920s the public electric supply and the telephone came to Bozeat.  The company continued to grow at a steady pace to the extent that workers began being bussed in daily from Olney, Lavendon, Grendon and Wollaston.  In 1936 Botterill’s became a Limited Liability Company, and in the same year the decision was made to have a company brand for football and rugby boots.  The name chosen was ‘GOLA’, an anagram of GOAL, and the first slogan, which appeared on the sides of buses was, ‘Gola means Goals’.

Football boots in the mid 30’s were all from russety coloured leather in three quality grades – split leather for the cheapest, side leather for medium and russet kip butts for the most expensive.  All had high legs, about the height of a modern work boot upper, a reinforcement strap across the toe area, and a hard tan coloured toe cap.  The soles of leather were machine attached with rivets and reinforced with machine-applied screwed wire.  Each shoe had six pre-built leather studs attached with three or four nails.  Screw-in studs were unknown and a small number of boots had rubber studs nailed on.  Boots were made in sizes from 7 child’s up to size 13 men’s.  The ex-factory prices for men’s sizes started from less than 3/- per pair (15 pence today).

By the late 1930s the company was producing around 5,000 pairs per week for the domestic market and a few for export.

September 1939 brought rapid changes as Britain went to war.  The Ministry of Supply immediately took control of production, which was reduced to essential levels.  For Botterill’s this meant that sports boot production practically ceased.  About a third of the factory was taken over by the Ministry for storage and the remaining part of the factory made heavy work boots and boots for the armed forces under government contract.  Young men and women went away to join the services, work on the land and into munitions factories.  A much reduced workforce carried on at Botterill’s until the war ended in 1945.

With the return to peace, there was no immediate return to freedom from control.  The Government controlled the production of industry, and boot and shoe manufacturers’ production was controlled in the quantity, design and quality they could make.  Botterill’s quota in the early post-war years was 2,000 pairs per week, and they had to make boots to Government Specification BMC/3 (Boots Men’s Common Grade 3), HMC/3 (Boots Heavy Common Grade) and SM/3 (Shoes Men’s Grade 3).  Exports were encouraged and rewarded by exemption from quota controls, but an export licence, difficult to obtain, was required.

The Company suffered an early post-war blow with the sad and unexpected death of George Botterill.  This left William’s oldest son Alfred as the major shareholder in W. Botterill and Sons Ltd.  Alfred was joined by his sons John and Dick when they were demobilised from the RAF and the Army in 1947 and after a period they joined their father as directors of the company.  Alfred retired at the end of the 1940s, and control moved to the third generation.

Gradually restrictions were eased and production was built up.  Closing Rooms were opened in rented premises in Lavendon and Olney.  Ladies were less willing to travel to work and it became common for branch factories to take more work to the workers.  Also in the late ’40s the first post-war extension was built at Bozeat.

Production through to the mid-’50s was still heavy boots and shoes, and football and rugby boots, still mainly in pre-war styles and made by long-established machine methods.

The latter years of the 1950s saw major changes.  Botterills heavy boot and shoe production was changed to directly moulded-on rubber soles.  These were sold under the brand name of OTTER, derived from bOTTERill to compete with the highly successful TUF brand.  These boots for the first time in the shoe industry offered a written wear guarantee for one year.  Demand was good and shift working started in the moulding departments.

At last football boot design and sales began to change.  Uppers were cut lower to little more than shoe height, russet leathers diminished and disappeared to be replaced by black, brown and even white leathers.  The soles were still leather riveted on with leather studs.  Screw-in studs of rubber, metal, and plastic started to appear.

Production grew, exports started to grow, mainly to the USA, Scandinavia, South Africa and Australia, and the first training shoes were made.  Almost all the early production went for export; the home market was not ready for trainers.

During these last years of the ’50s the important decision was made to develop the GOLA brand as the company’s main product, and to widen the sports range to cover athletics, cricket, sports accessories and the emerging market for training shoes.  The critical decision was made to appoint a sole distributor for the United Kingdom and to seek and appoint Gola distributors in overseas markets.

So, in the late 1950s the development of the Gola brand went into its stride.  Training shoes with leather uppers and a variety of rubber sole materials became very successful and further space was needed.  Already the main floor at London Road had been extended forwards to the front of the site, and now a new Closing Factory was built at Lavendon and the small Olney premises closed.  A factory was rented at Earls Barton for making training shoes.  The rubber moulding was doubled and moulds were installed to make directly attached soles for football boots incorporating multiple rubber studs as part of the sole.  Production continued to rise, the old pre- war level of 5,000 pairs per week had long been surpassed, and 10,000 pairs per week was in sight.

In the 1960s the strength of Gola grew, allowing the company to concentrate almost entirely on sports and to sell almost all of its production through its sole UK Gola distributor and its overseas Gola distributors.  More building was carried out with a new factory at Earls Barton to replace the rented premises.

The 1970s opened well with growing Gola sales in UK and widening sales abroad. Export sales had reached around 50% of production, going to a wide range of countries, from Finland to Canada to New Zealand and to Japan.  Weekly production went through the 15,000 mark, the Moulding Plant had been replaced by a new, more efficient faster injection moulding line and direct moulded training shoes went into production.  The decision was made to double the size of the Lavendon and Earls Barton factories, and soon after, to put a second storey on the office block at London Road and to build up the rest of the site.

Production moved on to 20,000 pairs per week, supplemented by more shoes bought in from manufacturers in the UK and sports bags and clothing sourced mainly in the Far East.  To provide a warehouse for future growth the old Drage Shoe Factory in Hope Street was purchased.

In 1974 it appeared that Gola had established a strong place in the world market for sports and leisure equipment, and encouraged by a leading merchant bank survey, Electronic Rentals Group decided that they wanted to invest and aim to compete with the world market leaders and that Gola was to be the vehicle.  This led to the proposal that ERG should take over Botterill’s totally and take over other companies to increase volume, range and market penetration.  After a great deal of heart-searching the Botterill family agreed that this was the best course for the business to expand.

As part of the deal to sell Botterill’s, the new owners agreed to purchase the Bozeat Boot Company Ltd and to merge the two companies with the distribution company that had its sales and administration at Dorking, Surrey, and its warehouse operation at Liverpool.  The merger of the three companies formed the new company Gola Sports Ltd.

The new Company started to operate in September 1974 with its head office at London Road, Bozeat, with manufacturing on the same site and further manufacturing at Easton Lane Bozeat, Earls Barton, Lavendon, and small closing units at Olney and Kettering.  There were storage sites at the old Drage Factory in Hope Street, Bozeat and the old Cinema in London Road, Bozeat.  All the employees of Botterill and Bozeat Boot Company transferred to Gola and were joined by a number of the former employees of the distribution company from Liverpool, altogether approaching 450 people.  The new company inherited a production capacity of around 30,000 pairs per week.

A new Managing Director was appointed by the new owners, and the former directors of Botterill, Bozeat Boot and two from Dorking were appointed to the Board.

During the Christmas holidays of 1974, a major reorganisation of the company’s manufacturing facilities was carried out, with the object of raising efficiency and of moving people doing similar jobs together so that they would think of themselves as working for Gola, not one of their former employers.

By 1977 it was becoming clear that sales were not growing as fast as planned, and that competition from other international brands was intense.  The other problem was the arrival on the international market of well-made training shoes from the Far East at prices that European manufacturers could not meet.

Disagreement built up on the proper course for Gola to remedy its problems.  This resulted in the resignation of a senior and highly experienced director, quickly followed by the owners’ decision to replace the Managing Director.

A new Managing Director arrived with the problems of the company continuing: strong competition, more Far East imports and now deteriorating relations with established customers.  By 1979 four more of the company directors had gone.

The Gola brand was sold to a company based in the North of England, however in the early 2000’s reinvented itself as a ‘retro’ sports / leisure fashion brand, diversifying its product base and selling to the same people, now grown up, who fondly remembered the brand from their childhood – but at premium prices.